A Reckoning in Boston 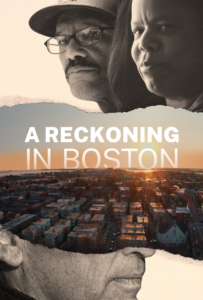 The National Low Income Housing Coalition presents a virtual screening of the film A Reckoning in Boston and a discussion with co-producer Kafi Dixon.  White suburban filmmaker James Rutenbeck comes to terms with a flawed film premise and his own complicity in racist structures while recording students’ engagement with the Clemente Course in the Humanities. He enlists students Kafi Dixon and Carl Chandler as collaborators/ producers with a share in the film revenues. Click here to register for the film and discussion.

The film and discussion are part of the National Low Income Housing Coalition’s “Summer of IDEAS” (Inclusion, Diversity, Equity, Anti-racism, and Systems-thinking) free virtual event series. The Summer of IDEAS educational event series aims to showcase and amplify stories about the social and economic issues facing marginalized communities in the U.S. The series pairs narrative and new media projects with discussions on topics such as housing disparities, race and poverty, environmental racism, and voter suppression led by prominent voices in these areas.