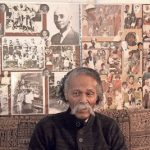 Some of those images will be on display as double-sided banners on utility poles for the next year in the Witherspoon-Jackson neighborhood. The Arts Council of Princeton organized the public art display in honor of Broadway, who died in 2020. He was 81 years old.”